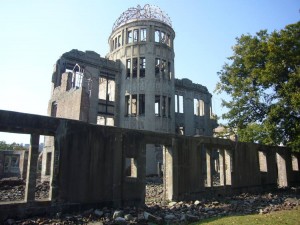 Located in the center of Hiroshima, Japan is a park dedicated to the legacy of the first city in the world to suffer a nuclear attack. The Hiroshima Peace Memorial Park was designed by Japanese Architect Kenzo Tange and was erected as a memorial of the close to 140,000 victims of the attack.

The location of the Park was once the busiest area of the downtown commercial and residential district. It was selected as the location for the memorial because the land was an open field that was created from the direct impact of the explosion. Each August the Park is host to an annual Peace Memorial Ceremony that memorializes those lives lost, as well as the impact on those who survived and were left behind. The city of Hiroshima holds a one-minute silence at 8:15 am (the time of the atomic bombs detonation) on August 6th each year. The intent of the creation of the space and the ceremony was not just to honor the lives that were lost, but also to establish a memorial that speaks to the horrors of nuclear weapons and to advocate for world peace.

Also located on the property is the Hiroshima Peace Memorial Museum. This facility is dedicated to educating visitors about the A-bomb and the lasting impact it has had on the city. The Museum has exhibits and information that discuss the events that led the escalation of the war, the role that Hiroshima played in it and the bombing and its aftereffects. Within the exhibits are extensive photographs and memorabilia from the city before and after the bombing.

Near the center of the Park is an inverted U-shaped/arch monument covering a cenotaph that is engraved with the names of all of the victims of the bombing. This monument was the first one built on the field when the Park was conceptualized. It was erected on the field on August 6, 1952. The arch shape was chosen to cover the cenotaph to symbolize a shelter for the souls of those who were lost to the bomb. It is inscribed with the words “Please rest in peace, for we shall not repeat the error.”

The Park also includes a memorial flame, the Children’s Peace Monument, memorial mound, Peace Bells, and additional exhibits that have been added through the years to memorialize and honor both those who were lost and those who were left behind.

The memorial has been added to the list of UNESCO World Heritage Sites. You can learn more about it here or by visiting the Memorial website here.

Coconut Club Vacations In the News